Does The Atom Really Exist?

Does The Atom Really Exist? According to recorded history, the atom concept was developed by the ancient Greeks and the mathematician Democritus. The Greeks are credited with the discovery of the atom and the atom idea. Essentially, an atom is an indivisible component of matter. Or, it can be thought of as matter in its simplest form. Since it is a component of matter, you would naturally think that it has mass.

This is logical and intelligent reasoning. So the next question is -- what is the mass of an atom? Well if you take the time to investigate, you'll find that scientists designate the terms atomic weight and atomic mass to designate the mass of atoms. You'll also find that atoms can exist as solid metals, noble gases, radioactive materials, or any of a number of different forms or atomic configurations. These different atomic configurations are designated in the Periodic Table Of Elements. The Periodic Table lists atomic numbers and atomic weights for all of the matter in the universe.

OK, this makes sense. But how did scientists come up with the mass of atoms? Good question. Well, I actually didn't know myself, so I had to investigate. I found out that modern science is not so modern after all; and, that teachers, textbooks, and classrooms are no substitute for the critical thinking process. I found out that the mass of an atom is not an actual mass; but, a theoretical mass. The reason why is that we cannot directly observe or directly measure individual atoms. From what I have read, light (essentially photons) interact with atoms introducing a subjective element to the measurement (which of course needs to be objective).

This subjective element is essentially a wave interaction that changes the structural integrity of the atom; and, in many cases, also changes the velocity and position of the atom and/or subatomic particles. This subjective element is addressed in the Heisenberg Uncertainty Principle which states that there is a fundamental limit to the precision with which certain pairs of physical properties of a particle, known as complementary variables, such as position x and momentum p, can be known simultaneously [2]. These subjective influences make it virtually impossible to get an objective and accurate measurement of a true atom.

So, if we want to figure out the mass of physical objects in the universe; then, we just use a scale in order to measure its weight/mass. So then we just put an atom on a scale and measure its weight. Of course, we can't do this because atoms are very small; and so, we can't pick them up with our hands. The other problem is that scientific measurement introduces uncertainty. It's hard to believe, but scientists and their ideas can affect experimental results.

To get a better understanding of how the observer introduces subjective elements into an experiment, I suggest that you take a look at the double slit experiment which was an attempt to establish the electron as a particle or a wave.

Unfortunately, the results from the double slit experiment were ambiguous; so, we still don’t really know if an electron exists as a matter or as energy. So, if we can't measure the mass of an atom or see it, then how do scientists come up with atomic mass and atomic weight?

I found out that atomic mass is a theoretical mass and not an actual mass. This theoretical mass is calculated using the force idea along with the mass and acceleration ideas. These ideas give us a relationship that we know of as the mathematical equation F=ma. This force idea and its relationship to the mass idea and acceleration idea constitute Sir Isaac Newton's 2nd Law of Motion. These ideas were developed in the late 1600's. The idea that force is equivalent to multiples of mass helped JJ Thomson calculate the mass of an electron back in the 1800s. This calculation helped scientists come up with atomic mass and atomic weights.

If look up the details on JJ Thomson’s experiment in Figure 1 after the Appendix section in this paper [1a], you will see that he uses the projectile motion equations in order to solve for mass using known quantities of 1.Magnetic Field as Frequency (1/s) ... physically generated by an Electromagnet and 2. Electric Field as an Acceleration or Frequency (m/s2) physically generated by Electric Field Plates.

Also, Thomson is treating electric field as mathematically analogous to the gravitational field; and, the magnetic field seems to have a mathematical derivation based on frequency.

Taking a step back, you will also see that the Electric Field Force and the Magnetic Field Force are treated as Force ideas that are, of course, related to the Mass Idea and the Acceleration Idea (Remember that F=ma is the idea that force is equivalent to multiples of mass.) Using these ideas, Thomson came up with the charge to mass ratio. This is the most accurate measure of theoretical atomic mass that scientist actually have. The actual mass of an atom is unknown and therefore the actual existence of the atom is unknown. We only know of its mathematical existence or theoretical existence. 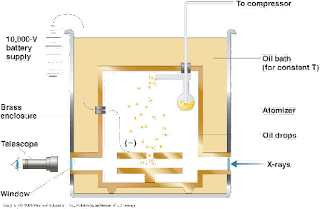 
For more research in general physics and quantum theory, read the book Mental Potentials Create Many Realities or Many Worlds

You have shared a nice article here about the Atomic Mass Number. Your article isn’t only useful but it is additionally really informative. Thank you because you have been willing to share information with us.